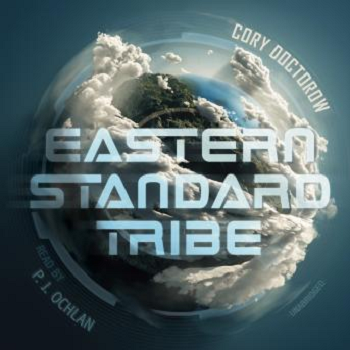 2004 20 Minutes into the Future / Next Sunday A.D. novel by Cory Doctorow. In the near future, online communities have become so common and frequented that to many people, the world is divided not by country borders, but by timezones. People's social circles are mostly restricted to these timezones, after all, it's hard to hold a conversation with someone over dinner when it's 4 in the morning where they are. The loose associations of people formed by this are referred to by their members as "Tribes". Tribers hold a loyalty to their tribes and some engage in cross-tribe warfare by infiltrating other timezones and undermining them.
Advertisement:

The protagonist, Art, is one such triber. He is from Toronto, but lives in London working for a IT firm. He and his friend Fede subtly work bugs into the user interfaces they design to make life hard for those on Greenwich time. At night, he chats with buds in New York and Massachusetts.

The book opens with Art narrating in first person on the roof of a psychiatric hospital, and is interspersed with him giving a third person tale of how he got there. The two plotlines converge midway through.

Like many of Doctorow's books, it is in the common domain and is available both in print and for free