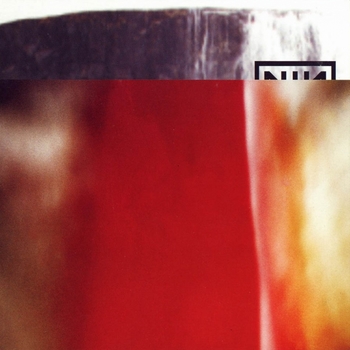 I'd listen to the words he'd say,
but in his voice I heard decay.
"The clouds will part and the sky cracks open
and God himself will reach his fucking arm through
just to push you down."
— "The Wretched"
Advertisement:

The Fragile is the third studio album by American rock band Nine Inch Nails, released on September 21, 1999. The album was recorded at Trent Reznor's Nothing Studios in New Orleans, taking over two years to make.

The album is largely seen as a conceptual sequel to the band's previous album The Downward Spiral from the perspective of that album's protagonist. The music and lyrics explore the protagonist's internal turmoil in his attempts to find stability and build back up from the dark place he's in emotionally and existentially.

In terms of sound, the album differs a great deal from Spiral by largely forgoing distorted and gritty sounds in favor of a more eclectic, art rock-styled approach. It's also, to date, one of the band's only two multi-disc studio albumsnote Not counting different disc arrangements between formats like vinyl. (the other being Ghosts I-IV), with its CD release split into "left" and "right" discs around 50 minutes each in length (totaling at 104 minutes, about 39 longer than Spiral). As a result, the album's additional time lends a slower pace, with its tracks focusing more on somber progression than the raw energy of its predecessor.

Although The Fragile reached #1 on the Billboard 200 chart on release and has since been certified double platinum, it didn't perform as well as Spiral, which was attributed to its different sound and insufficient promotion from Interscope Records. Around a year after release, the album (like its predecessor) received a remix album titled Things Falling Apart, which featured a cover of the Gary Numan song "Metal", as well as new tracks such as "10 Miles High" and "The Great Collapse".

In 2016, as part of the band's campaign to release all of their albums on vinyl, the band released a special four-LP version of the album called The Fragile: Deviations 1, which contains altered or instrumental formats of all of the songs combined with new songs written during the recording of the album.

Not to be confused with the Yes album Fragile.

But in his voice, I heard tropes:

Nothing can stop me now.