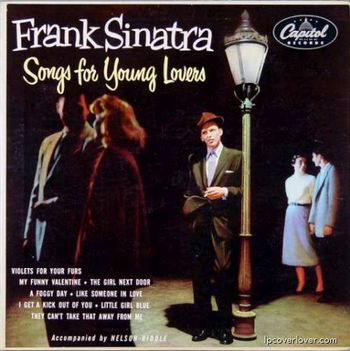 "The way you've changed my life / No, no - they can't take that away from me."
Advertisement:

Songs for Young Lovers is the seventh studio album by Frank Sinatra and his first for Capitol Records, released in 1954. It's one of his most popular albums, along with In the Wee Small Hours from the following year. Songs for Young Lovers is best remembered for Sinatra's renditions of "I Get A Kick Out Of You" and "They Can't Take That Away From Me".

This was also the first album for which Nelson Riddle conducted the orchestra. The arrangements, with the exception of the Riddle-arranged "Like Someone in Love", were done by George Siravo, who was uncredited much to his displeasure (Riddle later sent him a personal apology even though he had nothing to do with the oversight).

The album was originally released as a 10" LP with 8 songs. When the 10" format was discontinued in 1955, the album was combined with Swing Easy!, also a 10" album, to create a 16-song 12" LP. In 1962, the two albums were reissued separately, with each receiving four additional songs culled from singles and a jumbled running order. Some CD issues are of the 16-song "twofer", others are of the 12-song version.

In 2002 this album was added to the National Recording Registry for being "historically, culturally and aesthetically important".

Not be confused with Songs for Swingin' Lovers! by Sinatra from 1956.

Tracklist of the original 1954 release:

Tracklist of the 1962 reissue: