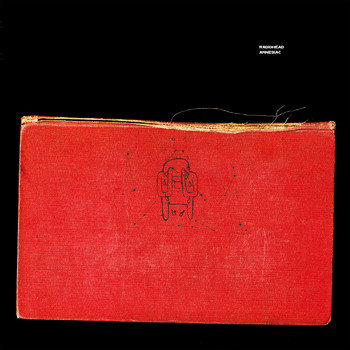 "I jumped in the river, and what did I see?"
"After years of waiting
Nothing came
As your life flashed before your eyes
You realize"
— "Packt Like Sardines in a Crushd Tin Box"
Advertisement:

Amnesiac is the fifth studio album by English rock band Radiohead, released in 2001.

Mostly recorded alongside its predecessor Kid A, released seven months prior, with the intent of releasing both as a double album (before being Divided for Publication), the album is considered a companion piece — if not a direct sequel — to its Y2K counterpart. Lead singer Thom Yorke described it as "another take" on the album, as well as "a form of explanation."

Sonically, the album displays the same influences as Kid A, including Jazz, Krautrock, Electronic Music, and Classical Music, but coalesces them into a mold that is predominantly Post-Rock-styled. Compared to Kid A, however, it is looser and more eclectic in structure, placing greater emphasis on its jazz and classical elements while still prominently featuring an electronic rock edge. Of the eleven tracks featured on Amnesiac, only the closer, "Life on a Glasshouse", had recording sessions progress after the release of Kid A, with Radiohead inviting the Humphrey Lyttleton Band to perform with them on the track in the waning months of the 20th century.

Upon release, the album was another commercial success for the band, topping the charts in the UK, Canada, and Finland and peaking at No. 2 on the Billboard 200. It would go on to be the 80th best-selling album of 2001 in the UK, and would be certified Platinum in both the UK, the EU, and Canada, as well as gold in the US, Argentina, Australia, Belgium, France, and Japan.

Like Kid A, Amnesiac was first teased with a series of short animated "blips" that aired on MTV and were briefly made available online. However, Amnesiac featured a much smaller amount of blips (possibly because the novelty had already worn off by then) and featured actual singles shortly after, each with proper music videos. The singles in question were "Pyramid Song", "I Might Be Wrong", and "Knives Out".

20 years after its release, Amnesiac and its predecessor were reissued as Kid A Mnesia, collecting both albums alongside a third disc of outtakes.

Think about the good tropes and never go back:

There's someone listening in.