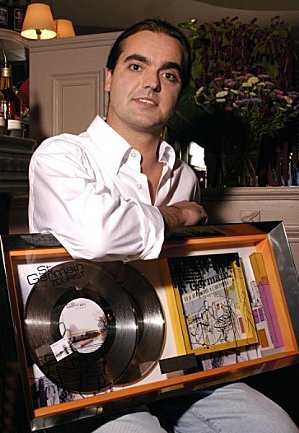 St. Germain is the stage name of Ludovic Navarre (1973), a French musician whose style is best described as a cross between Jazz and Electronic Music.

Navarre is influenced by Jazz (Miles Davis), Blues (John Lee Hooker), Reggae (Bob Marley, Toots & The Maytals), Hiphop, Dance, and Funk (Kool and the Gang). He started his career in the 1990's, working under a pseudonym derived from the French city St. Germain, which is closely associated with the French jazz scene and were he was born. His first two albums were only released domestically, but his third Tourist (2000) got an international release after the smash success of the hits: "Rose Rouge," "So Flute," and "Sure Thing." "Tourist" sold more than 4 million copies world wide. He wrote the soundtrack for the 2001 tragicomedy film "Chaos" by Coline Serreau. Also known for remixing songs by other artists, the most well known being "Isobel" from Björk's Post (1995).