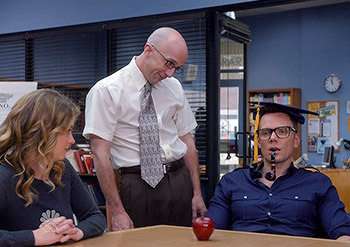 Jeff settles into a new job at Greendale and adjusts to the expectations of being on staff – however Jeff's lax attitude to his new position puts him at odds at Annie, whilst Professor Hickey shows him the ropes and shares some pointers on how to manage unruly and demanding students, revealing the truth about minus grades. Upon learning of the Greendale faculty's manipulative grading system, Annie incites a school-wide riot.

Meanwhile, Abed convinces the rest of the Study Group to take a new class, "Nicolas Cage: Good or Bad," with Professor Garrity. Unfortunately, Nicolas Cage's acting skill is a mystery that even Abed cannot unravel, and he descends into madness searching for the answer.

The Community episode "Introduction to Teaching" provides examples of: