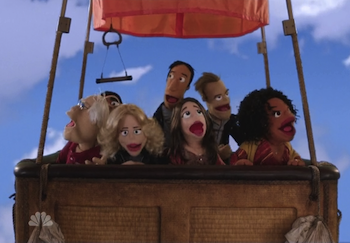 (singing)"Yes! This is adventure! We're starting to fly! We can see everything here in the sky!"

There's tension in the study group; their recent exploits have left nothing but awkwardness and hurt feelings, with the result that no one is looking at or speaking to anyone else. To break them out of their funk and get to the bottom of the problems between them, the Dean holds a puppet therapy session, and through the puppets the group recount how their collective realisation that they had collectively fallen into a rut inspired them to shake things up by going on a hot air balloon adventure. In typical fashion, this soon resulted in chaos and a lot of hidden secrets being brought to the fore...

The Community episode "Intro to Felt Surrogacy" provides examples of: