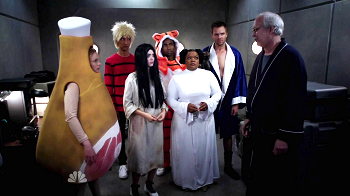 Pierce trying to creep everyone out on Halloween = the basic premise.
"I don't know. Maybe Pierce isn't doing so well after he lost his father and his inheritance in a video game battle with Gilbert, an illegitimate half-brother he never knew he had... [Beat] ...Guess I've never said it out loud."
— Annie

Before heading to Vicki's Halloween party, the study group reluctantly stops by Pierce's mansion in response to his call for help. He has accidentally locked himself in his panic room, forcing the study group to search his mansion for a red notebook that holds the code to unlock the door. The dark, mysterious and creepy house holds more than a few surprises, however.

Jeff teams up with Britta, but soon enough the two of them are more entangled in discussing Jeff's Daddy Issues and Not So Different relation to Pierce than actually looking for the MacGuffin. Annie and Abed take off as a duo as well, but Abed soon disappears into the heart of the mansion, leaving Annie to experience a variety of scary movie references that she does not get by herself. Troy and Shirley investigate a part of the mansion Shirley'd hoped Troy would never be exposed to. Meanwhile, the house appears to be trying to get to them, but it's not just that they need to worry about...