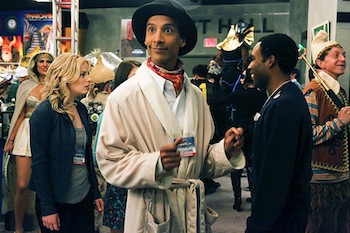 The study group ventures forth to an Inspector Spacetime fan convention, called InspectiCon.

While Troy and Abed's friendship seems endangered when Abed meets his pen pal Toby Weeks (Matt Lucas), another passionate fan of the series, the rest of the group has their own troubles. Jeff meets up with an attractive woman (Tricia Helfer) at the bar, which seems not to go over too well with Annie.

The Community episode "Conventions of Space and Time" provides examples of: