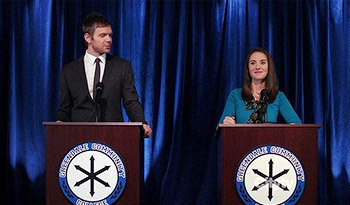 Dean Pelton announces that as part of a national tour of community colleges, Vice President Joe Biden will be visiting Greendale Community College, and will be greeted by the dean and the president of the student council. There's only one problem: Greendale has no student council.

Not to be undone, the dean announces that over the next seven hours Greendale will be holding elections for student president. Naturally, Annie announces her candidacy in a flurry of idealistic over-eagerness; annoyed, Jeff too decides to run, and his style-over-substance campaign ensures that heads will be butted before long.

Meanwhile, Troy and Abed cover the proceedings for the school television channel — and Abed finds himself drawn to Special Agent Vohlers of the Secret Service.

The Community episode "Intro to Political Science" provides examples of: