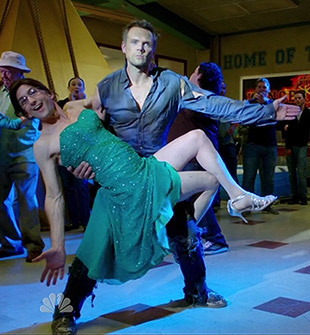 All of the Dean's dreams coming true.
"This can't be good. He's dressed as himself!"
— Jeff on the Dean

The Greendale Seven return for their final year at Greendale Community College. They show up for their first class, "History of Ice Cream", only to find that it has been overbooked, the classroom overrun by students who all believe they have a seat after some nefarious individual counterfeited a number of fake admission forms. Feeling there is only one way to fairly solve this issue, the Dean institutes "The Hunger Deans", a ridiculously elaborate series of physical competitions, the prize of each one being a plastic ball granting a seat in the class. Determined, Jeff sets out to obtain seven of the balls, so the Greendale Seven can get their history credit.

Jeff is determined to get all seven of them into the class, as he took a number of online summer courses, and only needs a single history credit to graduate "early", and the History of Ice Cream is the only history credit being offered that semester. The other study group members are sent into distress, with Abed suffering a near-mental breakdown, for which he only has Britta's advice to help him through. Meanwhile, Annie struggles with the impending "doom" in her own way (by pulling senior pranks with Shirley), Troy and Britta have some issues, and a well-known face turns up out of the blue, calling himself "Kevin", and remembering nothing of his previous actions. note It's Chang.

This was the first Community episode without series creator Dan Harmon involved, and also the first new episode in almost nine months (due to the powers that be being unable to decide where to put October 19th).