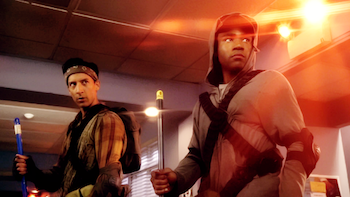 Troy and Abed, Intimidation Stance
Britta: Doesn't it seem like everyone is taking this game way too seriously?
Jeff: Seems normal enough for a school that's on 911's blocked caller list.

As Troy prepares to leave Greendale, Abed plans an epic going-away party; subsequently a game of "The Floor is Lava" transforms into a high-stakes Thunderdome-esque competition.