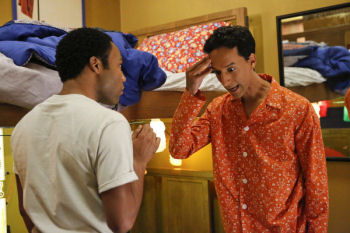 Right now, Troy is Abed and Abed is Troy.

Troy and Britta's upcoming one-year anniversary falls on the the same day as Troy and Abed's three-year celebration since watching Freaky Friday (1976) together. The two of them say the Trigger Phrase while holding the DVD and the next day finds the two of the them feigning switching bodies. Abed goes on an awkward date with Britta as Troy, while Troy-as-Abed goes hunting for the DVD with an indignant Jeff to restore their former selves.

Meanwhile, Shirley and Annie are shocked to find that Leonard usurps them both on the class list to become Valedictorian and they both set off to find out his secret.