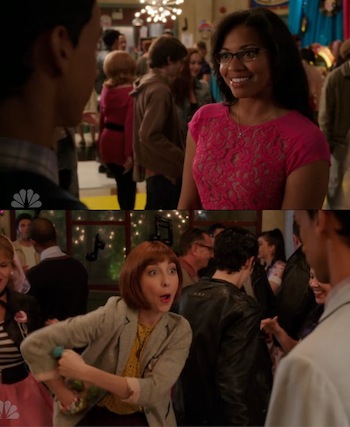 "I can do the classic 'Two dates in one night' sitcom trope! It's a once-in-a-lifetime opportunity for hijinks! I can't pass it up."
— Abed
Advertisement:

Britta accidentally creates a Sophie B. Hawkins dance (she meant "Susan B. Anthony," then wouldn't admit the mistake) to compete with the Dean's Sadie Hawkins sock hop. Annie and Shirley set Abed up with their choices of dates.

The Community episode "Herstory of Dance" provides examples of: