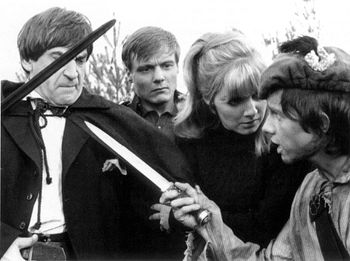 THERE CAN BE ONLY ONE!note Because screw it, we already made this joke for the previous serial...
The Doctor: Down with King George!
Jamie: So you are for the Prince after all.
The Doctor: No, I just like hearing the echo!
Advertisement:

The one where the Doctor pretends to be German.

The last "pure" historical story (aside from one two-episode oddity), in which the Doctor and friends are thrust into the midst of historical events without any additional sci-fi plot, and the only one to star the Second Doctor.

Written by Elwin Jones and Gerry Davis. This four-episode serial first aired from December 17, 1966 to January 7, 1967.

Landing in Scotland in 1746, in the aftermath of the Battle of Culloden, the new Doctor, Polly and Ben encounter a small group of Highlanders escaping from the battle. While Polly is off fetching water, the others are captured by an English lieutenant, Algernon Ffinch. Ffinch's men pass them on to crooked solicitor Grey, who is selling captured Highland clansmen into slavery in the West Indies.

Polly manages to blackmail Ffinch into helping, and the Doctor manages to get arms to the imprisoned Highlanders on a ship awaiting transport. They take over the ship and sail to safety in France while the travellers leave, accompanied by a new companion, clan piper Jamie McCrimmon.