Recap / Doctor Who S4 E8 "The Faceless Ones" 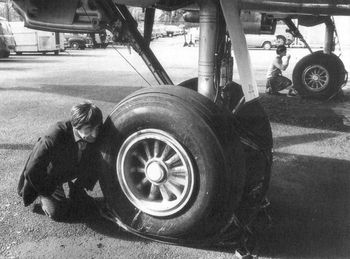 The one where Polly gets stuck in a box.

Written by David Ellis and Malcolm Hulke. This six-episode serial first aired from April 8 to May 13, 1967.

The Doctor contrives to land the TARDIS in the middle of a runway at Gatwick Airport, narrowly missing being flattened by an incoming airliner. As the travellers scatter to avoid being arrested, Polly witnesses a murder in a hangar and is then kidnapped by the murderer, a representative of "Chameleon Tours", while Ben vanishes mysteriously. The Doctor and Jamie try unsuccessfully to convince the authorities of foul play, before discovering that a number of young people have disappeared on Chameleon Tours holidays.

It turns out an alien race called the Chameleons have lost their own faces and identities due to an accident on their home planet and have been kidnapping the young people to appropriate theirs. The Doctor helps them to find another solution to their problem in exchange for releasing the human hostages.

Ben and Polly discover that they have returned to Earth on the very day they disappeared, and decide to stay behind while the Doctor gets ready to depart with Jamie: but hold on - where's the TARDIS?

Takes place on the same day (July 20, 1966) as "The War Machines", meaning Polly and Ben returned on the very same day they left. This was also the first serial written by Malcolm Hulke.

An animated reconstruction was released in 2020, providing the viewer with two different options: a colour 16:9 presentation of all six episodes, and a black-and-white 4:3 presentation. Interestingly, the two episodes that DO survive (Episodes 1 and 3) were also reanimated, giving the viewer the option of switching between the real and animated episodes or watching a consistent fully-animated story.