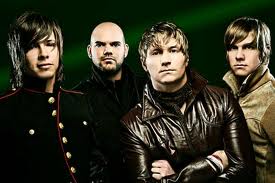 After everything we've learned,
We've finally come to terms;
We are the outsiders.
—"The Outsiders", "The Outsiders"
Advertisement:

NEEDTOBREATHE (no, it's not a misspelling, that's what they go by) is an American Rock band who's placed on Rock and Pop charts, though they're more commonly known for their Christian Music.

In 2006, NEEDTOBREATHE released their first album, Daylight in the UK. They began to grow their beard in 2007, with the release of their second album, until they became most well-known for their third album, The Outsiders. Since then, they have made numerous appearances, opening for people like Taylor Swift, and their songs being used for TV commercials and movie trailers. The group has also won multiple awards for their contemporary music.

This band's members, songs, and performances provide examples of: