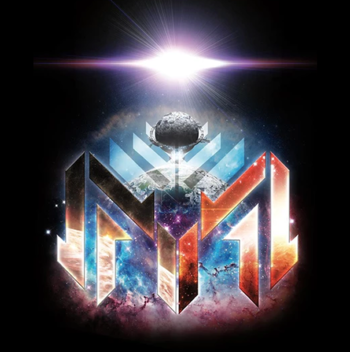 This Last Empire. This Final Horizon
An Industrial Metal band from Batavia, Illinois. Notable for being part of the growing "Cyber Metal" offshoot of Industrial Metal, and for being extremely prolific in spite of being independently produced and created, and have staved off from signing to a major label for about 11 years and counting. Oh, and for being very heavy on the dosage of epic when it comes to creating their songs.

They also are known for their incredibly in-depth storyline that starts with Conqueror, and ends with Xenon, with Acheron and singles, To Coexist Is To Surrender and The World We Lost serving as the prequels, and singles, Andromeda and Cepheus filling the gaps between them. Conqueror and the first half of Empyrean is about an After the End setting where a holy war has begun destroying the planet Earth, and the protagonist, so revolted with how insane both sides of the war are acting, renounces religion and escapes to the stars, looking for "The Just City", where mankind hasn't tried killing themselves over such trivial matters. The second half of Empyrean and Xenon reveal that all of Conqueror and the first half of Empyrean were just memories of a soldier from the holy war, and introduces us to our true protagonists, Amyntas and Alithea, who are stuck on the planet Empyrean, a planet inhabited by cyborgs. Eventually the protagonists find The Just City. However, it turns out The Just City is just full of cyborgs and humans relying on machines to live. At the end of Xenon, it is revealed that Alithea wants Amyntas to destroy Empyrean, which is explained in the album, Acheron, as the planet Acheron, a planet inhabited by humans, was almost destroyed by the armies of Empyrean, and the survivors retreated back to the Cepheus Ring, a giant mechanical ring surrounding the planets of Acheron and Empyrean, and revealing that Amyntas and Alithea are two of the said survivors. All the while, the politics of two planets, the fate of one, and the secrets of how the protagonist got out in space are explored throughout the music.

You've probably heard of them through being featured in a couple of Cr1TiKaL's Let's Plays as epic backdrops to absurd things.