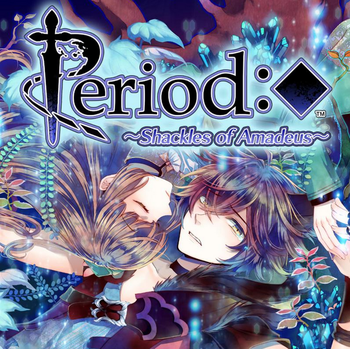 Period: Cube ~Shackles of Amadeus~ is a Play Station Vita Visual Novel developed and published by Idea Factory under its Otomate label. It was released on May 19, 2016 in Japan and on April 25, 2017 in North America and Europe.

Its story is about the protagonist. Kazuha, and her childhood friend Hiroya, looking for her brother, Shiki, after he went missing. Over in his apartment, they discover that he's been playing a new MMORPG, Arcadia: upon logging in to discover clues about his life there, they instead find themselves transported into the world of the game, and apparently have no option but to finish it all if they want to come back to the real world alive.

It's not all bad, however, as Kazuha soon finds herself referred to as the "Almighty", and realizes that the circumstances of her arrival provide her with a unique power that is highly sought after by the other players.