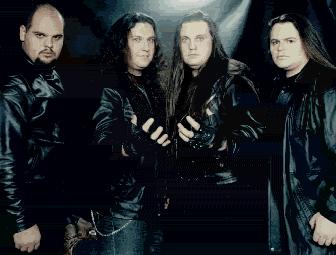 Dragonheart are a power metal band from Curitiba, Brazil, formed in 1997. They are probably most famous for their concept albums "Throne of the Alliance" and "Vengeance in Black". They are often mistaken for Dragonforce since they had the same name, yet they have wildly different styles.

Eduardo Marques left after the second album to join the band Cromathia. He was replaced with André Mendes, who played guitar and also shared vocal duties. With him, they released their third album, Vengeance in Black, and a compilation album, When the Dragons Are Kings: The First Ten Years in 2008.

The group are currently working on the finale to the Throne of the Alliance series, The Battle Sanctuary.

Tropes in Dragonhearts music include: