Music / maudlin of the Well 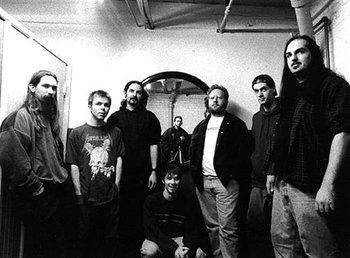 This isn't all of them.

maudlin of the Well (capitalisation intentional) was a Progressive Death Metal band from Boston, MA. They released three albums from 1999 to 2001, the latter two of which were conceptually linked, before they changed their name to Kayo Dot. They later reconvened (as maudlin of the Well again) to record material they had written during their existence as maudlin of the Well before re-dissolving the project back into Kayo Dot. This material was generally Lighter and Softer than the band's preceding material and qualified mostly as Progressive Rock. The band has performed live sporadically since then, but has mostly remained inactive.

The band's work has generally been a case of Keep Circulating the Tapes, as it has been released mainly in limited production runs and attracted a cult following. However, Blood Music (fairly) recently reissued their material in both CD and vinyl formats (with the now-defunct Antithetic Records co-releasing the vinyl), and these are generally not too hard to find (although still a bit pricey).

Part the Second is available for free here

, and most of the band's other non-demo material can be streamed at Kayo Dot's Bandcamp page

(although My Fruit Psychobells is missing, as are some of the bonus tracks included on past reissues of the albums).