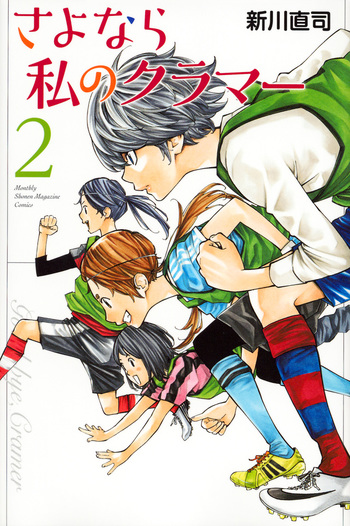 It begins with a middle school girls soccer match, where short-haired fifteen year old Sumire Suo shows off her overwhelming talent, but during a counterattack, her beautiful dribble to her shot at the goal gets blocked by a twin-tailed girl named Midori Soshizaki, ending the game.

With their middle school soccer careers over, these two rivals, Sumire and Midori, rather then going to a powerhouse school with a well-known girls soccer team, choose to attend Warabi high school, whose struggling girls soccer team has never made it out of the qualifiers. There they meet the odd, if not overconfident, Nozomi Onda. Going on to play in a scrimmage game, they all must now work together on the same team if they are to succeed.

Farewell, My Dear Cramer (さよなら私のクラマー, Sayonara Watashi no Cramer) is a Shōnen sports manga by Naoshi Arakawa, creator of Your Lie in April, and published in English by Kodansha Comics USA. It originally ran in Monthly Shōnen Magazine from 2016 to 2020.

It acts as both a spinoff and sequel to Arakawa's then-previous work, Sayonara Football, with the protagonist Nozomi Onda becoming part of the main cast of Farewell and taking place approximately a year and a half after that series ended. The title itself refers to German footballer and manager Dettmar Cramer

, who's considered the father of Japanese soccer.

Currently available for purchase via Comixology and Kindle, or via a subscription to Crunchyroll

In September of 2020, a TV anime was announced

for Farewell My Dear Cramer. It premiered in April of 2021 and it's animated by Liden Films, with Sayonara receiving a film adaptation from the same creative team in June of 2021.