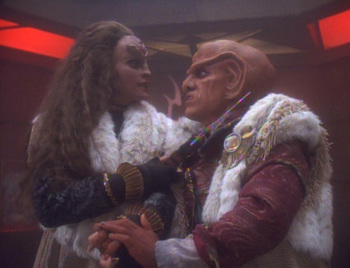 It's a slow night at Quark's, and a drunken Klingon who is close to passing out is making matters worse by not paying for his drinks. When Quark tries to talk to the Klingon about his tab, the mean drunk suddenly draws his dagger and lunges at him, only to fall over and stab himself by accident.

The Klingon's death draws a large crowd to the bar, people curious as to what exactly happened. Seeing an opportunity to drum up business, Quark weaves an elaborate lie of how he fought the Klingon and killed him in self-defense. It's enough to get the bar buzzing with customers once more. Odo warns Quark, however, that it wasn't just any Klingon who died in his bar, but Kozak, a Klingon of considerable power and influence. Quark, however, sticks to his story. When Rom asks why he would continue to commit to the falsehood after turning a profit, Quark explains that it's no longer just about making money, but having respect and prestige as a Ferengi who managed to slay a Klingon in mortal combat.

Meanwhile, O'Brien learns that Keiko has been forced to close her school due to the same lack of patronage that is affecting Quark's bar. In spite of his best efforts to cheer her up, she remains listless and without a purpose. O'Brien gets permission from Sisko to create an arboretum on the station, but Bashir tells him that it won't be enough.

Later on, however, Quark finds himself confronted by another Klingon: D'Ghor, who claims that Kozak was his brother. He is enraged that Kozak is dead and demands to know the circumstances. Fearful, Quark tells the truth. D'Ghor expresses further rage at the idea of Kozak dying in a drunken accident, as there was no honor in such a death...but if he had died in combat, it would be honorable, and he could accept that. Quark recommits to his lie and claims once more to have defeated Kozak in battle, placating D'Ghor.

Later in the evening, while Quark is counting his earnings, he is approached by another Klingon: Grilka, Kozak's widow. When she draws her dagger, Quark instinctively runs for cover. Grilka is displeased to learn that the man who allegedly killed her husband in battle was a cowardly Ferengi with a gift for lying...but that gift would be a great boon to her. Thus, she sedates and abducts Quark.

Quark awakens on the Klingon homeworld of Qo'nos in the company of Tumek, Grilka's advisor. Tumek explains that D'Ghor was no brother of Kozak, but a hated enemy who had long sought to conquer the House of Kozak and seize its power and property. D'Ghor had gained considerable influence over the years, and with Kozak dying without a male heir, the house was doomed to being taken over by D'Ghor. Had Kozak died in an accident, the Klingon High Council might have seen fit to grant special dispensation to Grilka and grant her control of the house, even though she would normally not have that right under Klingon tradition. Grilka, however, has a contingency plan: She forces Quark to wear a ceremonial robe and recite Klingonese chants, then very reluctantly kisses him. A very confused Quark learns that he and Grilka are now officially wed!

When D'Ghor makes his petition to take over the House of Kozak, Grilka interrupts the meeting to announce that she has completed the brek'tal ritual, wherein a warrior who slays the leader of a house is granted the right to marry the widow. Because D'Ghor claimed Kozak died in honorable combat, he had opened the door for the ritual to be conducted. The council, and D'Ghor in particular, are shocked to find that this warrior is actually a Ferengi. Chancellor Gowron, in particular, is flabbergasted by these developments and announces that he would need time to consider how to proceed. For the time being, the House of Kozak would be rechristened as the House of Quark.

Things are not panning out quite the way that Grilka hoped. When Grilka admits that she hadn't planned this far ahead, Quark asks what exactly was happening. Grilka explains that D'Ghor is seeking to claim a position in the High Council, increasing his influence and political clout at the expense of Kozak's. Intrigued, Quark proposes a new strategy: look through the financial records of the house for evidence of D'Ghor's acts of financial sabotage. Grilka is less than pleased with looking through some "filthy ledgers", but at a loss of any other recourse, agrees to Quark's proposal.

Quark's idea bears fruit, as a look through the ledgers reveals over five years of plots and schemes to devalue the House of Kozak's property and take on Kozak's debts for his own. Grilka is outraged: D'Ghor was sabotaging her house like a Ferengi instead of challenging her for the house's property. Quark thinks the idea ingenious, however: challenging Grilka would risk destroying the prize that he sought. With this evidence, Quark convenes with the High Council. When Gowron demands D'Ghor answer for these allegations, D'Ghor counters that Quark is lying, explaining that Kozak died in an accident and having an eyewitness to verify this: Quark's bumbling brother, Rom. Claiming his honor was insulted by Quark's "lies", D'Ghor challenges Quark to a duel.

With everything unraveling, Quark and Rom prepare to make a hasty escape. They are confronted by Grilka, who demands Quark answer D'Ghor's challenge, as it was the honorable thing to do. Quark shirks at accepting the duel, disgusting Grilka with his cowardice. She dismisses him, granting Quark an opportunity to escape.

As Gowron prepares to rule in favor of D'Ghor and permit him to take over the fallen House of Kozak, Quark suddenly returns to accept D'Ghor's challenge. The two take up bat'leths and prepare to fight, but then suddenly, Quark throws his blade aside and launches into an impassioned speech about how this duel is a sham. He has no hope of winning against D'Ghor, and forcing him to fight is nothing more than an execution. As such, he will not participate in this farce and leaves himself to D'Ghor's mercy, daring him to kill an unarmed Ferengi. D'Ghor happily accepts Quark's offer, but Gowron stops him. Disgusted at D'Ghor's willingness to kill a weak and unarmed Ferengi and realizing how truly cowardly he was, Gowron announces that D'Ghor has no honor and no place in the High Council. He crosses his arms across his chest and turns his back, the other Klingons in the High Council following suit: D'Ghor is summarily discommendated and ejected from the premises.

Impressed at Quark's bravery and recognizing that the circumstances are indeed peculiar, Gowron rules that special dispensation will be granted to Grilka, allowing her to lead her own house. Grilka, genuinely grateful to Quark, asks if there is anything she could do for him. When Quark suggests a divorce, Grilka grants it, slapping him across the face and loudly declaring their marriage dissolved in Klingonese. Afterwards, she gives Quark a kiss as thanks for his invaluable help.

Back on the station, O'Brien suggests that Keiko take a six-month scientific excursion on Bajor, assuring her that he's willing to make the sacrifice for her happiness. As for the Ferengis, Quark and Rom are back to lamenting their lack of business. While Quark would prefer to have some more latinum, Rom assures him that at the very least, he has respect - genuine respect from the Klingon High Council and Grilka. Afterwards, at Rom's request, Quark regales his brother with a (heavily embellished) retelling of his adventures on Qo'nos.