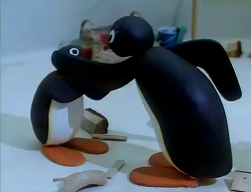 Corporal Punishment on a kids show? No thanks.
Dale: Y'know, Hank, I saw Homer strangling his son on a poster.
Hank: Well, while I don't advocate that kind of thing, I tell ya hwat, if Bobby came home with a skateboard, I might just... well... let's just say I understand.
—King of the Hill
Advertisement:

Not even Western Animation is safe from Abusive Parents...