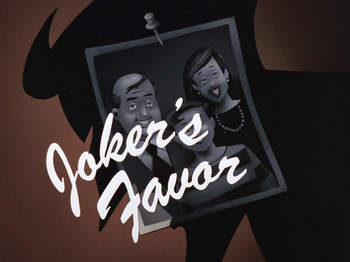 The episode begins with Everyman Charlie Collins driving home from his work and missing out on listening to a baseball game on the radio because of criminal activity. The called-off game is just the latest bit of bad luck in a day full of indignities, and Charlie complains about his very normal, everyday problems—busted after asking for a raise, his kid needs braces, his wife Bonnie is making meatloaf for dinner... As if that weren't bad enough, some speeding police cars and the Batmobile chasing someone cut him off. Angered and frustrated when yet another motorist cuts him off, Charlie loses his temper and decides to pursue the other car to give the driver a piece of his mind. The resulting rant, however, is the worst thing yet—it turns out this second car is being driven by The Joker, who does not appreciate people yelling at him. Charlie desperately tries to drive away, but the Joker cuts him off at every turn and corners Charlie when he gets out of his car to run away.
Joker: We can't have people cursing at each other on the freeway! It's simply not polite! I'm just going to have to teach you some manners!
Advertisement:

The Joker prepares to kill him, but Charlie begs and pleads for his life. It isn't until Charlie tearfully claims he'll do "anything" to save his life that the Joker's interest is piqued. Thoroughly amused by the idea, Joker promises to spare Charlie's life in return for a "favor" sometime in the future—he doesn't say what, he doesn't say when, but when he calls, he expects Charlie to answer. Then the Joker leaves, having changed Charlie's life forever...

Two years later, Commissioner Jim Gordon is receiving a testimonial ceremony at the upscale Peregrinator's Club, a show of support for all his years of service, and all the best and brightest in Gotham will be there to show support... except the Joker, who wasn't invited. Furious at this, the Joker plans to teach everyone involved a lesson, and instead of getting a specialist to help, he decides this would be a wonderful opportunity to cash in his favor with Charlie. Meanwhile, Charlie has changed identities, moved halfway across the country, and started a new life. Nevertheless, the Joker effortlessly contacts him.

Advertisement:
Charlie: How did you find me?
Joker: Oh, I never lost you, Chaz. You've become my... hobby! [evil laugh]

Charlie initially refuses, but after the Joker threatens his family, he grudgingly comes back to Gotham. His attempt to go for help is intercepted by Harley Quinn to bring him back to the Joker, who tells him the favor he brought him back to do—opening the door at the Commissioner's testimonial. That's it. Charlie is baffled at the simple task, but knowing how dangerous the Joker is, he didn't object. However, he does realize that there must be something much more sinister at work, and before the ceremony he gives a last ditch effort to contact Batman, jury-rigging a Batsignal that Bruce Wayne just happens to see as he is leaving the party early.

Later, at the testimonial, Gordon's ceremony goes as planned until partway through. Harley knocks on the door, Charlie answers it, and an unscheduled cake is rolled in, in the Commissioner's honor... and Charlie finds that his hand has been glued to the doorknob. The cake holds a surprise—gas that paralyzes everyone in the room except Charlie and Harley (she gives him a gas mask too). The Joker then pops out of the cake and gives a riveting speech in praise of the Commissioner, capping it off with a gift from him and "all the others doing 25 to life": an explosive medal, set to take out the whole building. Thus, the Joker departs with one of his worst enemies and a room full of people about to die and laughs in Charlie's face, leaving him behind to die as well.

Thankfully, Batman interrupts the party, and Charlie directs him to the bomb. After checking to make sure everyone's all right and freeing Charlie, Batman goes off in pursuit of the Joker, effortlessly taking out his goons (including Harley) and tracking the giggling madman into a temple the Peregrinator's Club reconstructed. After avoiding a few deathtraps and close calls, Batman manages to push Joker into the street, where he runs into Charlie, who sternly demands he stop. When the Joker tries to keep running, Charlie repeats his demand and grabs him, before punching him.

The Joker is furious about "a miserable little nobody" like Charlie making demands of him, and tries browbeating him into obeying him again by threatening Charlie's family. But, driven to mad desperation by the Joker's machinations, Charlie reveals he has taken one of Joker's bombs and plans on killing them both. He says that he has truly figured the Joker out: the Clown Prince of Crime's only real goal in life is defeating Batman in a grand public spectacle, or, at the very least, dying in the effort of it—Charlie gloats that he'll now make sure that dream will never come true because he will blow himself and the Joker up. His family will be safe and the Joker will only be remembered as the villain who was unceremoniously killed by "a miserable little nobody." And he hits the nail right on the head, as suddenly the disdainful and mocking Joker is reduced to gibbering, pleading, and screaming for Batman's help as Charlie menacingly advances to kill him with his own trap.

Charlie: You see? I can destroy a man's dreams, too! And that's really the only dream you've got... isn't it?
Joker: [looking TERRIFIED] Look, Charlie! You've had a busy day! All this running around, all this excitement with... [yells in the other direction] BATMAAAAAN!!!

Batman shows up just in time... well, actually, Batman was already watching this for a minute or two anyway, but why not let Joker sweat for a bit? Despite Batman's attempt to talk Charlie out of what he's doing, Charlie refuses, claiming that this is the only way his family stays safe. In desperation, Joker immediately takes all of his info on Charlie's family, which he keeps in a book, and frantically tosses it to Batman—at which point Charlie reveals that the bomb was a dud and his craziness an act all along, in order to get the Joker to give up the information.

With the Joker thoroughly defeated and humiliated, Charlie earns a rare laugh from Batman, and a new future as a free man. As Batman takes Joker away, Charlie wearily walks off happy to be able to see his family again... even looking forward to having some of Bonnie's meatloaf...

This episode marks the first appearance of Harley Quinn.