Webcomic / The Letters of the Devil 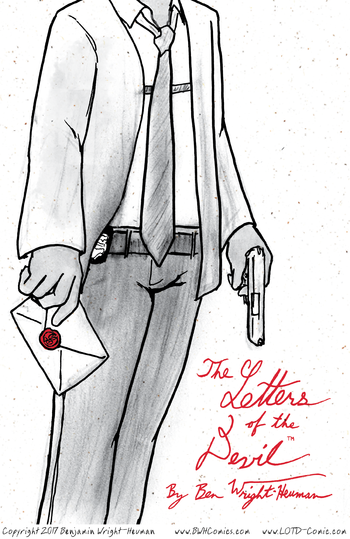 The Letters of the Devil: a Whodunit Mystery Graphic Novel by Ben Wright-Heuman

NO SECRETS ARE SAFE! Detective Cedric Dustin is a cop with a future: clever, cocky, and opportunistic. So when he receives an anonymous letter accusing a major financial figure of fraud, he jumps at the opportunity to advance his position. As he investigates, however, he discovers that he’s not the only recipient of a letter from the mysterious “L”, and he becomes entangled in the chaos that arises when dark truths are brought to light.

The Letters of the Devil is a whodunit mystery graphic novel that was launched as a serialized webcomic in February 2017. New pages currently post every Monday, Wednesday, and Friday. The creator, Ben Wright-Heuman, says that the story will be completed by October 2017, at which point he will be publishing a print edition.

The Letters of the Devil contains examples of: