Film / Enron: The Smartest Guys in the Room 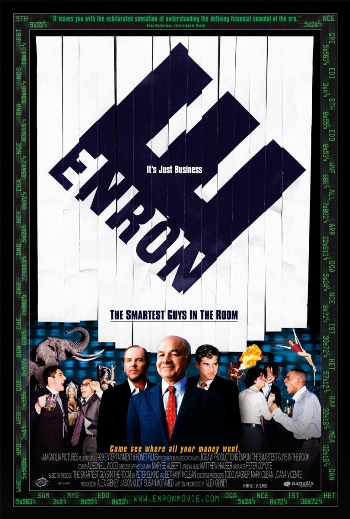 "Oh I can't help myself. You know what the difference between the state of California and Titanic? And this is being webcast, and I know I'm going to regret this - at least when the Titanic went down, the lights were on."
— Jeffrey Skilling
Advertisement:

Enron: The Smartest Guys in the Room is a 2005 Oscar-nominated documentary co-written produced and directed by Alex Gibney which charts the rise, peak, and fall of the energy corporation Enron; it is based on the 2003 book of the same name by Fortune reporters Bethany MacLean and Peter Elkind.

The film simplifies some of the convoluted financial details of the White-Collar Crime at Enron, comes out with some surprisingly sympathetic (though not excusing) appraisals of the criminals; and explores the little-acknowledged role that Wall Street firms played in perpetuating — and in some cases participating in — the company's fraud.

The smartest tropes in the room: