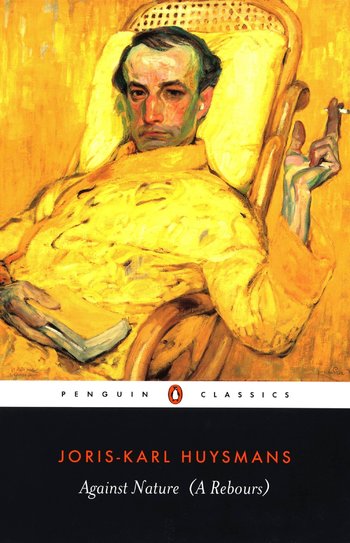 A 19th century novel by a French writer of Dutch descent, Joris-Karl Huysmans (real name Charles-Marie-Georges Huysmans), A Rebours was first published in 1884. It has been translated into English as Against the Grain and, more recently, as Against Nature. The novel focuses on the young dandy and aesthete, Duc Jean Floressas des Esseintes, who becomes disgusted with the society of his day and tries to escape from it by constructing a "refined Thebaid" - a house where he lives completely alone, surrounded by the artistic objects and books that obsess him and living out his aesthetic daydreams. It is largely plotless, and largely chronicles his aesthetic tastes, musings on literature, religion, paintings, and hyperaesthetic sensory experiences.

A Rebours was hugely influential on the writers of the Decadent movement in France and Britain, during the late 1800s, with the British writer and critic Arthur Symons, who was a contemporary, describing it as "the breviary of the Decadence". The Decadent movement, so called because the word literally means a process of ‘falling away’ or decline, signalled a set of interlinked qualities. These included the notion of intense refinement; the valuing of artificiality over nature; a position of ennui or boredom rather than of moral earnestness or the valuing of hard work; an interest in perversity and paradox, and in transgressive modes of sexuality. It essentially aspired to separate literature and art from the materialistic preoccupations of industrialized society, and morals being of secondary concern, if at all, led to the depiction of such depravities. One of the writers closely associated with the movement is Oscar Wilde, who was heavily influenced by A Rebours in writing The Picture of Dorian Gray, including in his description of the "novel without a plot" that helps lead Dorian astray.

Fun fact: In Real Life, Huysmans was a civil servant and worked for the French Interior Ministry, on whose stationery he wrote his novels.