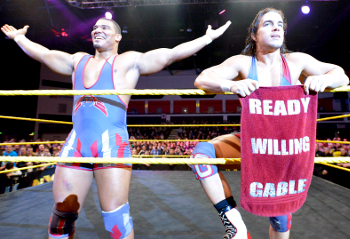 Towel says it all.
American Alpha was a professional wrestling tag team consisting of amateur-turned-professional wrestlers Jason Jordan (born Nathan Everhart on September 28, 1988 in Tinley Park, Illinois) and Chad Gable (born Charles "Chas" Betts on March 8, 1986 in Minneapolis, Minnesota), both working for WWE under its developmental brand NXT before being drafted to SmackDown Live.
Advertisement:

Jordan had signed with WWE's developmental system in July 2011, and found moderate success as one-half of the penultimate FCW Florida Tag Team Champions

with CJ Parker before the titles were deactivated upon the switch from FCW to NXT. However, he struggled to gain any momentum under the revamped system for several years. Gable signed with WWE in November 2013, but would not debut on the NXT television program until January 2015, at which point he began being used as a jobber to the established stars of NXT while looking impressive in defeat with his mat technique. Four months later, fortunes would change.

In May, fresh off walking out on his unsuccessful tag team with Tye Dillinger, Jordan was looking for a new tag team partner when Gable decided to show up and try to convince him that they could work well as a team. Jordan brushed him off and went through a series of other partners for the next two months, only to finally accept Gable after exhausting all other options. Instantly, they found chemistry. Their impressive athletic talent and wrestling aptitude came through from their debut match and only continued growing from there, and though they began their run together as nominal heels, the crowd warmed up to them enough that they began to be used as faces after their showing at October's NXT TakeOver: Respect, where they made it to the semi-finals of the Dusty Rhodes Tag Team Classic tournament before losing in a resilient effort to the much larger heel team of Baron Corbin and Rhyno.

They continued climbing up the ranks of NXT's tag team division, and by January 2016 began using the team name of American Alpha, defeating several former NXT championship teams such as Blake and Murphy, The Vaudevillains, and The Ascension. In the match that kicked off WrestleMania weekend, Gable and Jordan opened NXT TakeOver: Dallas by beating The Revival (Scott Dawson and Dash Wilder) to capture their first NXT Tag Team Championship

, before losing the titles back to the Revival 68 days later at NXT TakeOver: The End. As a result of the 2016 WWE Draft on July 19, the team was drafted to the SmackDown brand, where they defeated The Wyatt Family (Luke Harper and Randy Orton), in a match that also included Heath Slater and Rhyno and The Usos, to capture the WWE SmackDown Tag Team Championship

On July 17, 2017, Jason Jordan was revealed to be the illegitimate son of Kurt Angle and was moved to Raw, where Angle is General Manager, thereby disbanding American Alpha. The two continued to support each other, though.