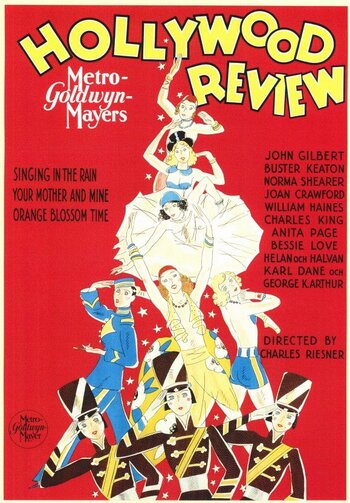 Never mind the poster; it's "Revue", not "Review".
Advertisement:

The Hollywood Revue of 1929, directed by Charles Reisner, might just be the oddest film ever to get an Academy Award nomination for Best Picture.

In 1929 Metro-Goldwyn-Mayer was at a crossroads. The studio had resisted talkies for as long as it could, continuing to produce a large number of its movies as silent films in early 1929 while the rest of Hollywood had already quit the medium completely. The writing was on the wall, though, so MGM elected to introduce several of its biggest stars to talking films at the same time, with a single all-star film. Thus, The Hollywood Revue of 1929 was born.

The film is essentially a feature-length variety show, filled with sketch performances and musical numbers featuring almost every major star under contract to MGM at the time, nearly all of whom were making their talking film debut. While a box-office smash in its time, and as mentioned an early Oscar nominee, the film is now remembered chiefly as a curio and as a snapshot of Hollywood in transition. Some of the cast members thrived with the coming of sound pictures (Joan Crawford, Norma Shearer, Laurel and Hardy), while others saw their careers go right down the toilet (John Gilbert, William Haines, Karl Dane, Buster Keaton).

Besides its All-Star Cast, the film is probably best remembered for featuring the song "Singin' in the Rain" (which was introduced on stage in The Hollywood Music Box Revue earlier that same year, thereby predating the film Singin' in the Rain by over 20 years).

Warner Bros. quickly responded with Show of Shows, which served the same purpose, the primary differences being that WB was the first studio to embrace talkies and its film was shot almost entirely in Technicolor.