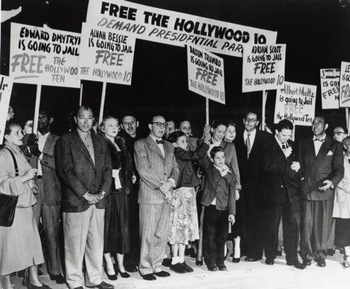 Hollywood on Trial is a 1976 documentary feature film directed by David Helpern.

It's a film about The Hollywood Blacklist, focusing on the "Hollywood Ten". The film starts out with a thumbnail sketch of American history in the 1930s—the Great Depression, FDR and the New Deal, labor strikes and unrest. The House Un-American Activities Committee is formed in 1938 to investigate supposed disloyalty; in practice, the committe focused its attention solely on liberals and leftists. After a strike by Hollywood set decorators in 1945 turned violent, and after Winston Churchill's "Iron Curtain" speech essentially started the Cold War, HUAC turns its attention to Hollywood.

The hearings, which start in 1947, result in a parade of movie stars, writers, and executives. Gary Cooper pleads ignorance of Communism, while people like Walt Disney and Ronald Reagan speak out against Communism in Hollywood. Ten witnesses before the committee refuse to state if they have ever been members of the Communist Party: one director (Edward Dmytryk), and nine screenwriters, including Dalton Trumbo, maybe the best screenwriter in Hollywood in that era. The "Hollywood Ten" take a stand believing that right is on their side and they'll be vindicated; instead they're all held in contempt and sent to prison. When they get out, they're all blacklisted from working in the film industry. In 1951, when the committee starts a second round of investigations, things get much worse, for many more people in Hollywood.