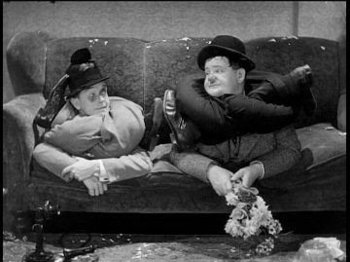 Well, Here's another nice mess you've gotten me into!
Going Bye-Bye is a classic 1934 comedy short film starring Laurel and Hardy. It was the first Laurel and Hardy film to feature a Nightmare Fuel ending gag. The story starts where the boys are in court after the arrest of Butch. After Butch was found guilty, he says that when he escapes from prison, he will break off their legs and wrap them around their necks.

This short provides the example of: