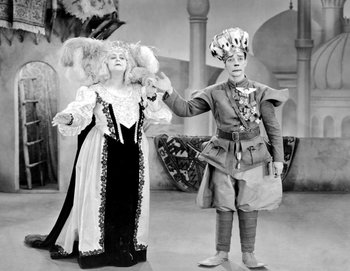 The "sad clown" makeup is only too appropriate.
Advertisement:

Elvira Plunkett (Page), beauty queen and the pride of Gopher City, Kansas, wins a contest and goes off to Hollywood to become an actress. With her is her overbearing stage mom (Trixie Friganza) and her bumbling friend and manager, Elmer J. Butts (Keaton). On the train to Hollywood, they meet a Hollywood movie star, Larry Mitchell (Montgomery) who is enchanted with the lovely Elvira. This is greatly upsetting to Elmer, who loves Elvira, although she doesn't know it.

Elvira actually isn't all that interested in being a movie actress, but Larry gets her into MGM. More surprisingly, he eventually gets Elmer a movie contract, despite Elmer horribly botching his lines in his first screen test. Eventualy, Elmer becomes a movie star of his own—but will he win Elvira's hand?

Free and Easy was Keaton's talking film debut. It actually did well at the box office, even though MGM had little idea of how to translate Keaton's talent to talking pictures. However, in hindsight it's seen as the beginning of Keaton's disastrous career slide that saw him eventually fired from MGM in 1933, with his starring film career over for good.

There was a Spanish-language remake, Estrellados, that was shot immediately after this one, as was common practice for a little while in the early talkie days. Keaton learned his part phonetically.