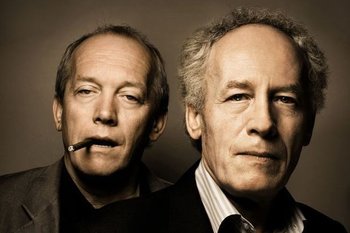 Jean-Pierre on the left, Luc on the right.
"We are the same: one person, four eyes."
Advertisement:

Jean-Pierre Dardenne (born 21 April 1951) and Luc Dardenne (born 10 March 1954) are two Belgian brothers and directors acclaimed for their austere style. Their work is deeply rooted in social realism, observing the trials and tribulations of the Belgian underclass. As you can imagine, their movies get bleak, although they usually leave at least a little bit of hope for the protagonist at the end.

The Cannes Film Festival absolutely loves these guys. In 1999, the Dardenne brothers won the Palme d'Or for Rosetta, upsetting the predicted winner, All About My Mother. Almost every movie they've made since then has won something at Cannes (the only exceptions being Deux jours, une nuit and The Unknown Girl), and the two won the Palme a second time for L'Enfant in 2005.