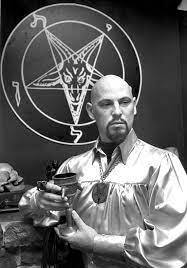 Anton Szandor LaVey (born Howard Stanton Levey; April 11, 1930 – October 29, 1997) was an American author, musician, and occultist. He was the founder of the Church of Satan and the religion of LaVeyan Satanism. He authored several books, including The Satanic Bible, The Satanic Rituals, The Satanic Witch, The Devil's Notebook, and Satan Speaks! In addition, he released three albums, including The Satanic Mass, Satan Takes a Holiday, and Strange Music. He played a minor on-screen role and served as technical advisor for the 1975 film The Devil's Rain and served as host and narrator for Nick Bougas' 1989 mondo film Death Scenes.

According to LaVey himself, on Walpurgisnacht, April 30, 1966, he ritualistically shaved his head, allegedly "in the tradition of ancient executioners", declared the founding of the Church of Satan and proclaimed 1966 as "the Year One", Anno Satanas-the first year of the Age of Satan (it was later demonstrated that LaVey in fact shaved his head because he lost a bet and made up the "ancient executioners" story after the fact). LaVey melded ideological influences from Friedrich Nietzsche, Ayn Rand, H. L. Mencken, and Social Darwinism with the ideology and ritual practices of the Church of Satan. He wrote essays introduced with reworked excerpts from Ragnar Redbeard's Might Is Right and concluded with "Satanized" versions of John Dee's Enochian Keys to create books such as The Complete Witch (re-released in 1989 as The Satanic Witch), and The Satanic Rituals.

He was good friends with Marilyn Manson.