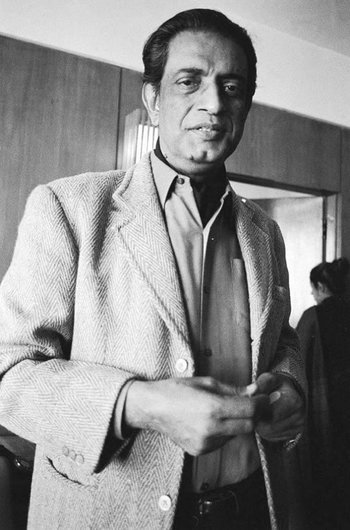 movement, which emerged in the 1950s as an alternative to mainstream Indian cinema with its Bollywood blockbusters. He was the first Indian film-maker to attract a Western audience and a global reputation, and alongside Akira Kurosawa he raised awareness to a truly international cinema beyond the confines of America, England, France, Germany, and the USSR (i.e the North-Western Hemisphere) that had previously defined the Small Reference Pools for movies. His movies inspired filmmakers in India, Iran, Africa, and other parts of the world.
Advertisement:

The son of poet and writer Sukumar Ray, Ray was an heir to the Bengali Renaissance. He studied at Rabindranath Tagore's famous ashram/retreat/school of Santiniketan and grew up knowing the major artists, musicians, writers, and poets of Bengal's important artistic community. From an early age, Ray was fascinated with graphic arts and interested in movies. Around the time of The '40s, Ray was working as a graphic illustrator at an agency, illustrating books and ads for a living, while during the day he would see movies and pal around with American GI stationed at Calcutta who helped a young Ray see Citizen Kane. (He was an instant fan.) Ray was important in Calcutta's Film Society, programming films from around the world, and interacting with international filmmakers who visited India. When the French film-maker Jean Renoir arrived in India to make The River, Ray interviewed him and interacted with other members of Renoir's locally recruited crew, namely Bansi Chandragupta who was art director for Renoir. Ray befriended a musician for that film, Subroto Mitra who worked as an amateur photographer and piqued by his obvious talent and interest in cinema, recruited him to be his cinematographer. Ray had planned to adapt the popular novel Pather Panchali for cinema (he had illustrated it for a commercial commission) and he and his mostly inexperienced crew made a film entirely outside of India's system over a period of three years. Their production was highly innovative, notable for cinematographer Mitra's invention and use of "bounced light" and for its poetic rhythm. The film attracted attention and played at international film festivals, receiving high acclaim, the first Indian film to ever do so.

Ray followed that film with further adaptations forming The Apu Trilogy, launching a remarkably prolific career, and inspiring film-makers across different parts of India to make their own films, independent of Hollywood and Bollywood imitations. Ray was stereotyped in India and around the world for making films about peasants in villages, but only The Apu Trilogy fits that stereotype. He was indeed a highly diverse film-maker, prone to Genre Roulette, favoring literary adaptation (of classics from the Bengali Renaissance, many of them works by Tagore), detective stories, political thrillers, Historical Fiction (Distant Thunder which deals with the Bengal Famine of 1943 and The Chess Players which deals with the annexation of Awadh by the EITC, the only film of his in Hindi).

His films were at times controversial in India. His film Devi was critical of idolatry and Hinduism's treatment of women and provoked angry responses from conservatives. He was also criticized by Bollywood film-makers who resented Ray's international reputation overshadowed most of their commercial films (which they pointed out was seen far more widely and by far more people than Ray's audience) while arthouse film-makers criticized him for not taking a political stance. Nonetheless, Ray remains beloved in his native Bengal and respected and admired in India for being a major artist. He won the Padma Bhushan (India's highest civilian honor) and most famously became the first Indian, and one of two Asiansnote The other being Akira Kurosawa, a friend of Ray's to win an Oscar for Lifetime Achievement Award. He's highly admired by Elia Kazan, Akira Kurosawa, Martin Scorsese, and Wes Anderson (whose film The Darjeeling Limited makes many references to him).

Indeed his following in America extends to popular culture. Matt Groening named Apu Nahasapeemapetilon in The Simpsons after the title character of The Apu Trilogy.