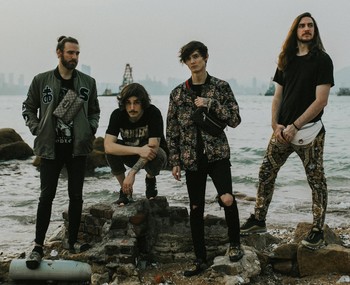 "We play rap music with guitars."note From Left to Right: Clay Aeschliman, Tim Henson, Clay Gober, Scott LePage
Polyphia is a Dallas-based Progressive Rock band started in 2010. Initially started as a pure djent band that got big through a viral video on YouTube and subsequent covers, they branched out from their first couple of EPs and first album as a band willing to experiment with pop elements while also keeping the tight, djenty feel while mixing progressive elements and math rock time signatures and progressions into their sound, creating a unique and upbeat sound.
Advertisement:

And then in 2017, ''TheMostHated'' EP dropped, marking a hard left turn in their sound.

TheMostHated incorporated trap beats, pop synths, and drum machines into their sound, creating a weird but very original take on their contemporaries, and it was such a wild success that they haven't looked back since, releasing their next album and their next five singles using this formula, and they don't appear to be slowing down whatsoever.

They are also characterized by their deeply un-serious-but-serious personas, especially Tim and Scott, who basically spend interviews and videos messing around and telling jokes when they aren't playing.

Polyphia and their music contains examples of: