Advertising / A Sneak Peek at Pokémon 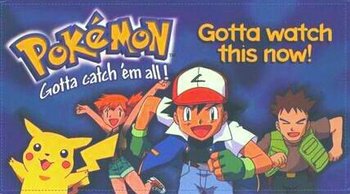 A Sneak Peek at Pokémon is an English promotional video released to promote the then-upcoming Pokémon franchise. It was released in limited quantities in the United States and Canada during the summer of 1998 through Nintendo Power and some stores.

The video was made to drum up hype for the upcoming Pokémon Red and Blue, Pokemon anime, Pokémon trading card game, and the rest of the franchise (but especially the anime). It was already becoming a Cash Cow Franchise in Japan and Nintendo wanted to make sure the franchise would be a hit internationally as well.

A Sneak Peek at Pokémon is especially notable for featuring several of the original voice actors from the English dub voicing lines in the video.

A Sneak Peek at Pokémon provides examples of: