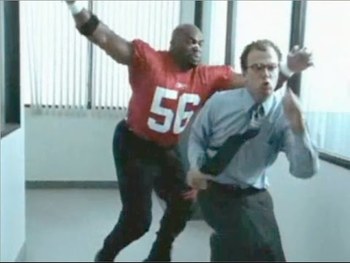 Triple T doing his thing
A popular series of comedic ads for Reebok released in the early 2000's.
Advertisement:

At Felcher & Sons incorporated, the higher-ups have found a unique way to enforce office protocol and etiquette.

#56, "Terrible" Terry Tate, Office Linebacker. When an employee steps out of line, Triple T brings down a quick delivery of bone rattling pain to get them back in line.

But Terry isn't all about making disorderly employees ride the Pain Train. He's an effective employee, and good buddies with everyone around the office...which doesn't mean you're exempt from his wrath.

The ads were exceedingly popular, along with helping Lester Speight rise to well known status. 6 were run between 2000 and 2004.