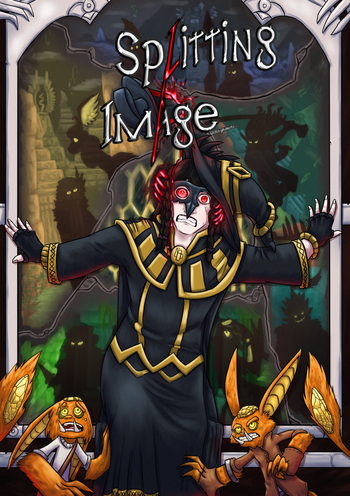 "A story about atonement in a caged kingdom, where not all is what it seems."
—Series description
Advertisement:

Splitting Image is a fantasy webcomic by Iris-Grimoire, launched on May 2nd, 2019. It follows Mortimer, a former villainous Dark Lord in a world of floating islands surrounded by a barrier.

Once he was defeated, the sorcerer was allowed to use his magic knowledge to work, support his remaining lackeys, and try to make amends, but faces constant harassment from people affected by his evil plans, who think his punishment was too mild. In an attempt to help both sides, his former enemy, Great Hero Veriesin, recruited him to investigate suspicious beast attacks around the realm; but when they discover a new Dark Lord is active and reusing his former strategies, Mortimer, Veriesin and their allies must both uncover the new villain's identity, and save their world from their wrath.

The comic is hosted on Tapas