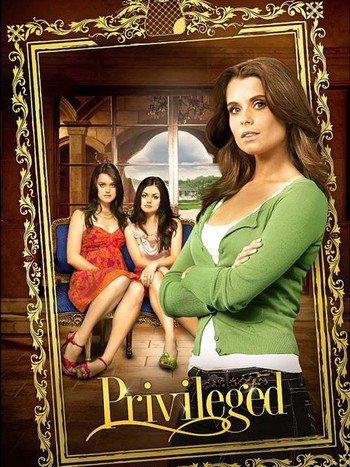 Privileged tells the tale of 23-year-old Megan Smith (JoAnna Garcia Swisher), a Yale graduate who is fired from her New York job and sent to meet with Laurel Limoges (Anne Archer), a successful businesswoman in the field of cosmetics. On arrival at Laurel's grand Palm Beach home, Megan learns that she is to be hired as a tutor for Laurel's twin grandchildren, sixteen-year-olds Rose (Lucy Hale) and Sage Baker (Ashley Newbrough). Easier said than done, as the girls are much more focused on shopping and parties than studying.

To add to the drama, we soon learn that Megan has a history of her own in Palm Beach including the father and younger sister Lily (Kristina Apgar) she left behind when she went away to Yale. Throw in Charlie ((Michael Cassidy), a childhood friend with a crush; Will (Brian Hallisay), an attractive and wealthy next door neighbour; and Marco (Allan Louis) a gay chef who's not afraid of straight talking and drama's never far away.

The series was created by The CW; it was cancelled after the first season, though not before managing to finish on a cliffhanger. It was based on the book How To Teach Filthy Rich Girls by Zoey Dean, though there are changes — notably, the main character's surname was originally Simms, but was changed to Smith for the series.