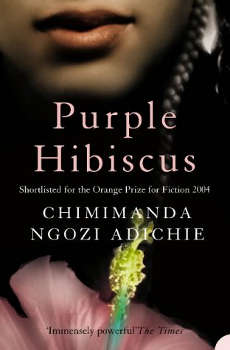 "Jaja’s defiance seemed to me now like Aunty Ifeoma’s experimental purple hibiscus: rare, fragrant with the undertones of freedom, a different kind of freedom from the one the crowds waving green leaves chanted at Government Square after the coup. A freedom to be, to do."
— Kambili
Advertisement:

Purple Hibiscus is a 2004 novel by Nigerian author Chimamanda Ngozi Adichie. It is a Coming-of-Age Story in which a teenage girl watches her brother question her father's beliefs, discovers her own heritage and finally blooms into a competent, confident young woman.

The book explores many themes like loss, suffering and particularly change, which is represented by the titular purple hibiscus.

It is now studied as part of a popular GCSE English Literature course in England.