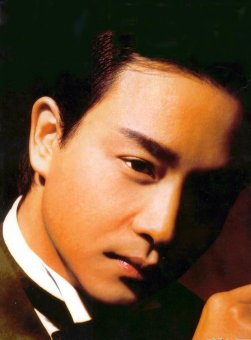 "He promenaded this otherness. It made him a star but obscured his talent. It is a gift to be beautiful; it is an art to know how to lend that beauty to a film character. An actor of commanding subtlety, Leslie rarely overstated an emotion because he knew what the camera saw: he knew the camera loved him."
— Richard Corliss on Leslie Cheung, TIME magazine

He entered the Hong Kong entertainment industry in 1977 and broke through with the hit song "Monica", which granted him teen heartthrob status in the '80s. During his heyday, he was known for his rivalry with fellow entertainer Alan Tam

, cooked up by the Hong Kong tabloid media, which resulted in fighting between their fans. Despite this, the two remained friends in private.

He announced his retirement from the pop music industry in 1989 and completed a 33-show farewell tournote reflecting his then-age of 33 thereafter. In 1990, he left Hong Kong and emigrated to Vancouver. He continued his music career as a composer into the '90s, composing more than ten songs during that time. In 1993, he won Best Original Movie Song Award from the Golden Horse Film Festival for the theme song "Red Cheek, White Hair" to the movie The Bride With White Hair. He returned to the industry in 1995 with a post-"retirement" album, Beloved.

Cheung is also known for his acting career. He starred in several Wong Kar-wai films such as Happy Together and Days of Being Wild, the latter of which won him the Best Actor Award at the Hong Kong Film Awards in 1991 and his first nomination of Best Actor at the Golden Horse Film Festival (Taiwan). In 1992, his performance as the Beijing opera star Dieyi Cheng in the historical film Farewell My Concubine won him critical acclaim and international fame. Farewell My Concubine is the first Chinese film to have won the Golden Palm award at the Cannes Film Festival.

Because of his international popularity both as an actor and singer, Leslie Cheung also contributed to the rise of Cantonese music in other parts of East Asia. He is the first Chinese artist to dominate the music charts in Korea and set a record of foreign artists of holding 16 concerts in Japan.