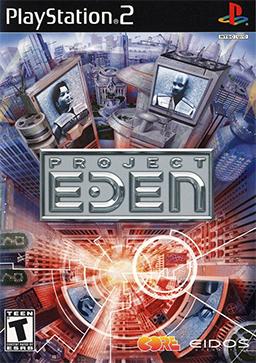 The screenshots are confusing, so here's a nice box shot
Advertisement:

Project Eden is a sci-fi computer action-adventure game, developed by Core Design, incorporating puzzle elements, set in a futuristic city on an earthlike planet. You are charged with controlling a four-man (well, two men and two women) team to investigate problems in the Real Meat factory, a synthetic meat factory (Orwellian irony) that supplies the city. Inevitably, things get far worse as the team tries to rescue some technicians who were kidnapped from the factory.

The game featured several unique features, including 'Regen points' that would respawn characters if they died and a weapon that slowed down time in a limited area. The team members could be controlled individually by the player or set to do simple tasks, like follow or defend themselves.

This game has absolutely nothing to do with Dirty Pair: The Movie (more commonly known as Project EDEN) or the Eden Project

. Also not to be confused with Rez, a game that went by the codename "Project Eden".