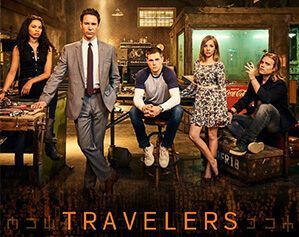 Travelers is a Sci-Fi television series co-produced by Netflix and Showcase Television for its first two seasons, and Netflix exclusively from the third season onward. It focuses on a team of five time travelers from the future, coming back to change history and avert the apocalyptic timeline in which they live. Through Mental Time Travel, the Travelers jump back and possess people who died in the original timeline, right before the historically recorded time of death; they take over the person's body and identity from that point forward.

The focal Traveler team consists of:

Things appear straightfoward enough at first, with their planned mission being executed just fine (if improvising a little on the way), but as the plot thickens and knowledge of the future grows so does the difficulty in changing it, as well as telling if the changes are for the better.

The show is notable for being created by Brad Wright and starring a not-quite Production Posse of several people who worked on Stargate SG-1 and its many spinoffs (the final episode being directed by none other than Amanda Tapping) sharing some of the writers, directors and producers. It is also surprisingly original in its execution of Science Fiction tropes, taking several already seen concepts (many of them already shown in Stargate-verse) and giving them unique new twists, or analyzing them from new perspectives.

A second season was greenlit in early February 2017 and began filming in March. Season three (to air exclusively on Netflix) was announced in March 2018. Filming commenced later that year. It was announced in February 2019 that Netflix has cancelled the series; all three seasons remain available on the streaming site.

Has a character page that could use some troper love, along with other expansion.

This show provides examples ofnote The Travelers' real names are unknown; they use the names of their hosts. As we see far more of the Travelers than the hosts, if the name is used without qualification here it refers to the Traveler.: