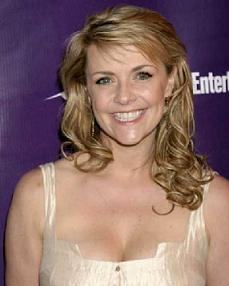 "I like playing smart, savvy, sexy women — because it's so not me!"
— Amanda Tapping
Advertisement:

Amanda Tapping (born 28 August 1965 in Rochford, England) is an English-Canadian actress best known for her role as astrophysicist Samantha "Sam" Carter on the long-running sci-fi series Stargate SG-1. She would reprise the role on Stargate Atlantis and Stargate Universe. Incidentally, Samantha Carter has appeared in more episodes of the Stargate franchise than any other character.

From 2007 to 2011 she starred as Dr. Helen Magnus on the Syfy series Sanctuary, a show for which she was also executive producer (along with Stargate alumni Damian Kindler and Martin Wood) and occasional director.

Born in Rochford, Essex, England, she moved to Ontario at age three and excelled in both drama and environmental science, but chose to focus on drama, and graduated from the University of Windsor School of Dramatic Arts. She began her career on television, in series including Street Legal, Flash Forward (1996), The X-Files, and Due South.

In 1997 she was cast as Captain Samantha Carter, a theoretical astrophysicist and Air Force officer, in Stargate SG-1. The role catapulted her to stardom and would become iconic among fans of science fiction as Carter proved to be a role model for geeky girls everywhere and one of the Stargate-verse's most beloved characters. She then reprised the role on Stargate Atlantis, but was Demoted To Recurring Guest Star during the show's fifth season so she could focus on the development of Sanctuary.

After Sanctuary's much-lamented cancellation in 2012, she joined the Canadian Primeval spinoff Primeval: New World as a director. Then she was cast in a recurring role as the angel Naomi for the eighth season of the hit series Supernatural. Never let it be said that Amanda Tapping has problems keeping busy!

She directed an episode of the first season of Dark•Matter and the Season 2 opener, but disappointly did not go in front of the camera (this was planned for the latter case, but she was unable to do so as it could not be fitted in with her prep work). She did appear on-screen in Killjoys however. Most recently, she has been a director and executive producer on the Alternate History series Motherland: Fort Salem, where she also voiced the Mother Mycelium in the final scene of the series.

Among other things, she is known for her bright, beaming smile and bubbly personality, and is one of the most recognizable faces in geekdom today. In fact, she has been called the "Queen of Sci-Fi" and seems to have embraced the title with open arms.

While she is obviously incredibly dedicated to her work, she is also an irrepressible goofball. This tendency is shamelessly enabled by her castmates; Teryl Rothery (Janet Fraiser) and Richard Dean Anderson (Jack O'Neill) were particular enablers on Stargate, and Robin Dunne (Will Zimmerman) seems to have done that job on Sanctuary. She is singlehandedly responsible for the familiar and hilarious Gatehead meme about being "... stuck on a glacier with MacGyver!!", and in producing said meme endeared herself to sci-fi fans forevermore. She then proceeded to create several more at convention appearances, including "Stargate Barbie" and the "puff and ruffle."

She lives in Vancouver, Canada, with husband Alan Kovacs and daughter Olivia.

Example of:
Younger and Hipper