Nothing Is the Same Anymore 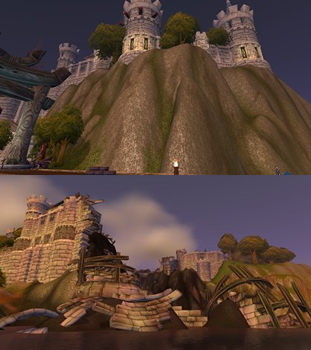 Dragon renovations tend to be drastic.
"The show itself is taking episodes to ‘recover’ from the trauma of the end of Series 2. That episode horribly wounded the show itself. Cut it to pieces. Shattered it. Dismembered it. We are now watching a show, a formula, a set-up, in fragments. Roughly stitched back together but unable to return to its former shape."
— Jack Graham,

For many shows, the Status Quo Is God. No matter what happens in a given episode or arc, somehow, things go back to the way things used to be by the end. However, there are shows that have the guts to break this pattern — to seriously change their premise, or at least to shake up major parts of their story, and really mean it. No Reset Buttons, no Snap Backs, no way to restore the comfortable status quo. Nothing Is The Same Anymore is Exactly What It Says on the Tin — the setting, or the characters' situation, has changed significantly and irrevocably, for better or for worse, and now the characters have to deal with it.

The trick is to do it without Jumping the Shark, which can be a difficult task.

As there isn't an easy out if it all goes wrong, the writers tend to have to resort to desperate measures like All Just a Dream to attempt to undo the damage should things go pear-shaped and are rejected by audiences. This rarely goes well, and can even result in a Franchise Killer. Pretty much the only hope is a well-executed Continuity Reboot.

SPOILERS AHEAD. You have been warned.