As the character pages get updated with each episode of the show that is aired (as well as select info from official sources), they contain unmarked spoilers, beware. 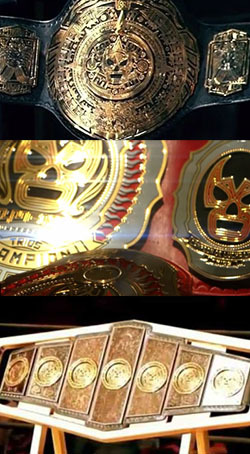 Lucha Underground also recognizes the AAA Mega Championship, the main title of Mexican wrestling promotion (and LU's sibling promotion) AAA. The AAA Mega Championship can be defended on Lucha Underground and a title change would translate to AAA.
Important Matches and Powerful Objects
Once a Season, Lucha Underground holds a match known as Aztec Warfare. This normally twenty-person battle royal (number defied during Aztec Warfare II with the late-match addition of Matanza Cueto at #21) was originally used to determine the very first Lucha Underground champion. The first three Aztec Warfares each saw a new champion crowned, with Pentagon Dark breaking tradition by retaining in the fourth. In stark contrast to a normal over-the-top battle royal, eliminations in Aztec Warfare are by pinfall or submission.Season 3 introduced two new MacGuffins: the Piedra Immortal and the Gauntlet of the Gods.

The former, an ancient Aztec amulet, was originally stated to only work on women (with that later Jossed near the end of Season 4), causing them to become at least The Ageless (with a stated overlap of Immortality Begins at 20), if not invoking Complete Immortality. It was broken by Captain Vasquez to revive her daughter, Catrina, but the half-amulet only guaranteed her a sort of half-life, stuck in between two worlds, unless the amulet is made whole again. As Catrina managed to regain her life at the expense of Fenix, she voluntarily gave her half of the amulet to Melissa Santos. In turn, Melissa gave her half to Aerostar, exchanging it for Fenix's life. With one half of the amulet already in his possession, Aerostar then paid a visit to his old friend Vasquez, reminiscing with her before she gave him her half and disintegrated, joining her father and daughter in the afterlife as the Piedra Immortal finally became whole once more. Traveling back in time once again, Aerostar arrived at Dario Cueto's funeral, just after Antonio Cueto left. Opening the casket, he laid the amulet upon Dario's chest, reviving him.

The latter, the Gauntlet of the Gods (given its official name during Ultima Lucha Tres), was given to Dario Cueto by Councilman Delgado, and has been heavily implied to have come directly from the Unknown Benefactor. As Delgado told Dario that "his Ascension is complete" and to "have a new host body ready", it was originally thought (but has since been disproven) that the Gauntlet contained the Unknown Benefactor himself. The Gauntlet was later revealed to be a conduit for godly possession and would soon begin to influence Cage, leading to much destruction including the death of Councilman Delgado. It would later draw the interest of Captain Vasquez, who knew of its powers and even struck a deal with Catrina to procure it at all costs. It was stolen from Cage by Jeremiah Crane for Catrina, then stolen by Dario Cueto while Cage fought Crane and Mil Muertes to get it back. As revealed by Cage, the Gauntlet is powerful enough to nullify other major powers, such as Catrina's teleportation. While Muertes won the Gauntlet at Ultima Lucha Tres, it was subsequently stolen from him by the returning King Cuerno. Catrina's attempt to reclaim the Gauntlet from Cuerno ended in failure, as Cuerno informed her that he had given the Gauntlet to someone else (heavily implied at the time and later directly confirmed to have been Aerostar), who hid it away. When asked about it by Antonio Cueto, Cuerno later claimed that it had been stolen from him. Seeing it as a necessity to defeat Matanza in a Sacrifice match, Aerostar gave the Gauntlet to Johnny Mundo to use against the Monster. The Gauntlet enabled Mundo to overcome Matanza, but when he intended to keep it, Aerostar appealed to his vanity and he voluntarily gave it back. Aerostar then met with King Cuerno and Dragon Azteca Jr., and the three arranged to hide it again, but DA Jr. convinced them to lend it out once more to the returning Black Lotus, who used it to finish off Matanza for good. She and DA Jr. were then ambushed by Jake Strong, who took the Gauntlet and returned with it to the Order's limousine.In Season 3, Dario Cueto introduced the Cueto Cup, a thirty-two person tournament, with the winner receiving an automatic title shot at Ultima Lucha Tres.