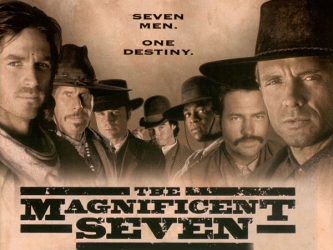 The Magnificent Seven was a short-lived Western action-adventure series that ran on CBS from 1998-2000. Like its film namesake (and origin in Seven Samurai), it was a story about seven unlikely men (and ultimately heroes) who band together to save a unprotected town (in this case, a isolated village made up of freed slaves and displaced American Indians) who end up sticking around to protect the local town. Unlike the movie, all seven of the main characters survive the pilot episode and are joined by various townspeople for further adventures.

And in the second season:

Ezra: My, uh, pecuniary interests do shame me.