Playing Their Own Twin 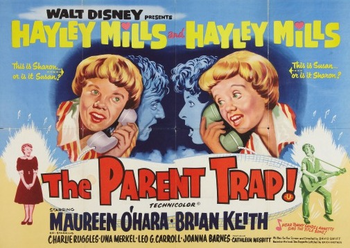 Of course, there are more actors without twins than there are pairs of twins who are actors. Finding a pair that are identical enough and are both suitable for the part may be very hard and much more effort than just the one.

Reasons for casting this way include when on Long-Runners the twin reveal is a plot device thought up for an already developed character later on, and the actor hasn't got a twin. Other times, the production really wanted to hire a certain actor because of their marketability or skill massively outweighing pairs of twins that auditioned. Necessarily they are Always Identical Twins. The role in the story may take the form of the Backup Twin.

However, though it may seem as though you could save money by hiring one actor to play two parts, it may cost more. If the twins ever interact then you're going to need to hire at least one other person to be a stand-in (and spend a lot of time finding someone who looks like the twin actor) as well as spend twice as long filming these scenes. You're also going to be paying the actor for two roles, not one. Still, the availability of twin-less actors plus their appeal may start saving the production money and bring in more viewers, so earning the money back more. As well as that, some specialist acting agencies for twins ramp up the hiring cost because of the scarcity of genuine twin roles and/or actors.

A form of Acting for Two and usually achieved via Double Vision. The opposite of Making Use of the Twin.

There can also be In-Universe examples, for when there is a Show Within a Show. If a character pretends to have a twin that's the Fake Twin Gambit.

Note that only examples of twin/related characters should be listed: clones, doppelgängers, and other identical counterparts are more typically played by the same actor and not part of this trope. Voice Actors who voice both of a pair of twins go on Talking to Himself.